How Can I Cast My Vote?

Electors will receive a notice in the mail providing instructions and a secure PIN number to use to vote by either the internet or telephone.  Electors are encouraged to vote using either the internet or telephone between 10:00 a.m. on Friday October 14, 2022 to Monday October 24, 2022 (no later than 8:00 p.m.).  There is no need to wait until October 24 (Election Day) to cast your vote.

On Election Day and during advanced polls, voters will have the option to vote using a traditional paper ballot at various locations in the Township

Dates and times for paper ballot voting are yet to be determined. They will be posted online when available.

If residents wish to vote online and require internet - Free Internet access is available at the Township of Whitewater Region 44 Mian Street Cobden.

The Township of Whitewarer Regions’s municipal elections to elect a Mayor, Deputy Mayor, Councillors, and School Board Trustees will take place on Monday, October 24, 2022.

The Voters' List for the Township of Whitewater Region is prepared by the Municipal Property Assessment Corporation (MPAC).  MPAC is a not-for-profit corporation mandated by the Government of Ontario to conduct property assessments for tax purposes on behalf of municipalities, and is legislated to provide municipalities wit ha Preliminary List of Electors in a municipal election year.  This list is used by Municipal Clerks to produce the final Voters' List used for the election.

You need to be on the voter’s list to vote in a municipal council or school board election.

Find out if you're on the list to vote for municipal council and school board elections at voterlookup.ca.

You can add yourself, confirm or update your personal information, change your school support for the purpose of elections and add other electors under your address.

Monday, May 2, 2022, is the first day eligible individuals may file nomination forms for the offices of Mayor, Deputy Mayor, Councillors and School Board Trustee for the 2022 Municipal Elections. In addition, it is the first day to file a notice of registration as a third party advertiser. This must be done at the off ice of the Township of Whitewater Region, by appointment only.

Eligible individuals may consider running for one of the following offices:

A person is eligible to be a candidate for Mayor, Deputy Mayor or Councillor if they are:

A person is eligible to be a candidate for School Board Trustee if they are:

A Canadian citizen;
At least 18 years old;
A resident within the school board's area of jurisdiction;
A supporter of that school board; and
Not legally prohibited from voting.

To become a candidate for the office of Mayor, Deputy Mayor, Councillor or School Board Trustee, candidates must file a prescribed ‘Nomination Paper – Form 1’. Nomination forms must be filed by the candidate or by an agent acting on the candidate’s behalf, in person, at the Township Office during the candidate’s scheduled appointment.

Endorsement of nominations for Mayor or Councillor

Nomination forms for candidates running for the office of Mayor, Deputy Mayor and Councillor must be submitted with an “Endorsement of Nomination – Form 2” that includes a declaration of qualification from at least 25 eligible electors endorsing their nomination.

Candidates must pay a filing fee (by cash, debit, credit card, certified cheque or money order) when they submit their nomination forms.

Deadline for withdrawal of nomination or change of office

The deadline for a candidate to withdraw a nomination is Friday, August 19, 2022, at 2 pm.

A withdrawal of nomination must be submitted in writing with the original signature of the candidate, and in person by the candidate or their agent, at the Township Office, by appointment only.

Proof of identity of the candidate or, if applicable, their agent, must be presented when filing the withdrawal or nomination forms to change office.

A completed “Nomination Paper – Form 1”;
A completed “Endorsement of Nomination – Form 2” (only applicable to candidates running for the office of Mayor, Deputy Mayor, and Councillor);
The filing fee; and
Proof of identity.

A third party advertisement refers to an advertisement in any broadcast, print, electronic or other medium that promotes, supports or opposes a candidate in the election, or, a "yes" or "no" answer to a question on the ballot.

Individuals and entities wishing to conduct third party advertising in the Township of Whitewater Regoin must register with the Clerk before they can begin advertising.

Who can register as a third party advertiser?

The following persons and entities are eligible to file a notice of registration:

An individual who is normally a resident in Ontario;
A corporation that carries on business in Ontario; and
A trade union that holds bargaining rights for employees in Ontario.

Notices of registration may be filed at the Township Office as of Monday, May 2, 2022, at 8:30 am, by appointment only. The deadline for an individual, corporation or trade union to submit a notice of registration is Friday, October 21, 2022, at 4:00 pm.

Deadline for withdrawal of registration

The deadline for a registered third party advertiser to withdraw their registration is Friday, October 21, 2022, at 4:00 pm.

A withdrawal of registration must be submitted in writing with the original signature of the registered third party, and in person by the third party or their representative, at the Township Office, by appointment only.

Proof of identity of the individual or the representative of the corporation or trade union must be presented when filing the withdrawal of registration.

Requirements for registering as a third party advertiser:

For Candidate info use the 2022 Candidate Guide from MMAH

For Voter information use the 2022 Voters Guide from MMAH

Notice of Filling Requirements and Penalties

The Municipal Elections Act places responsibility on the Clerk to have regard to the needs of the electors and candidates with disabilities. Accessible customer service standards must be followed when conducting municipal elections. Town of Renfrew election accessibility plan ensures that candidates and electors with disabilities have full and equal access to all election information and services.

The Township of Whitewater Region

Notice of Nomination for Office 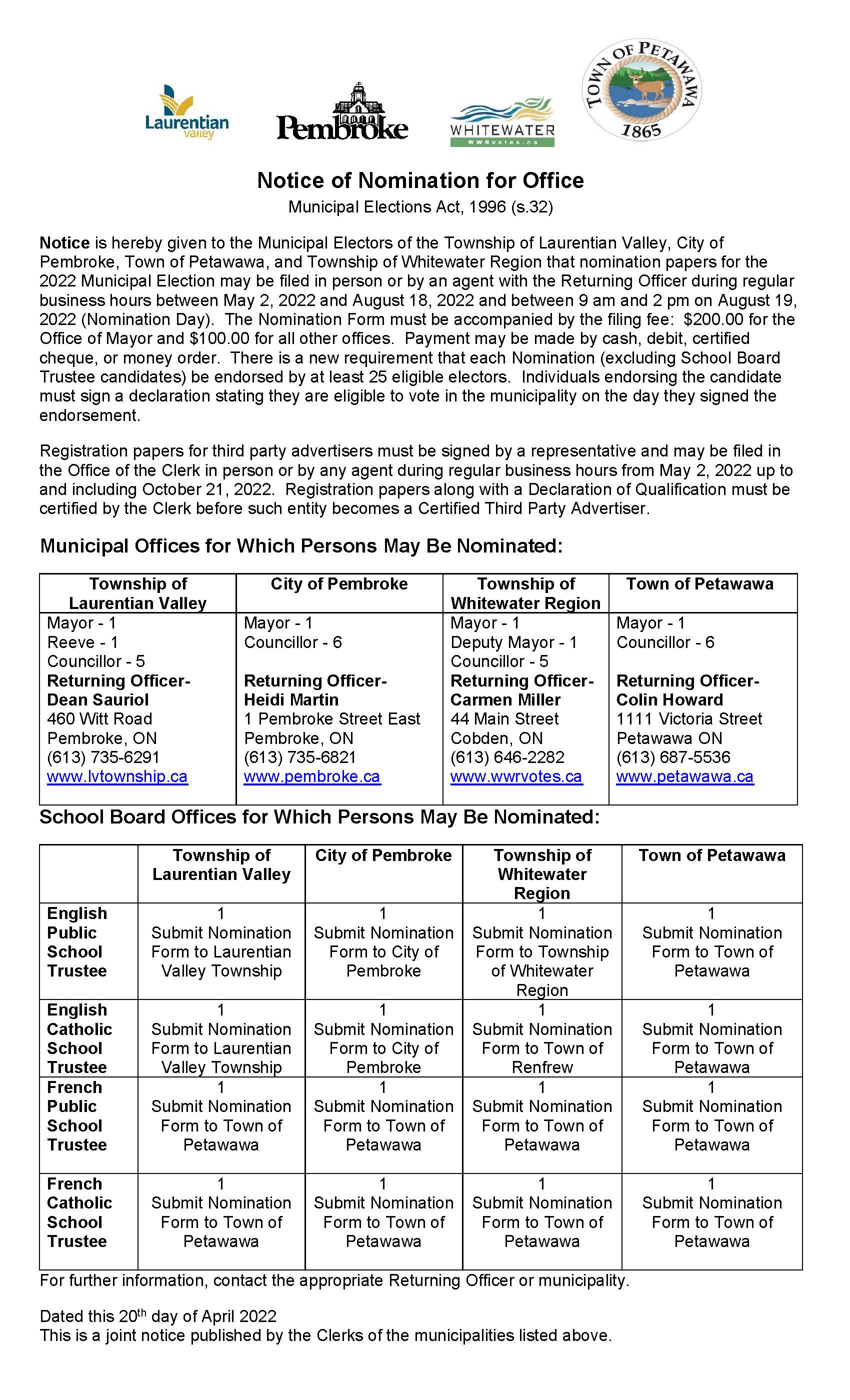